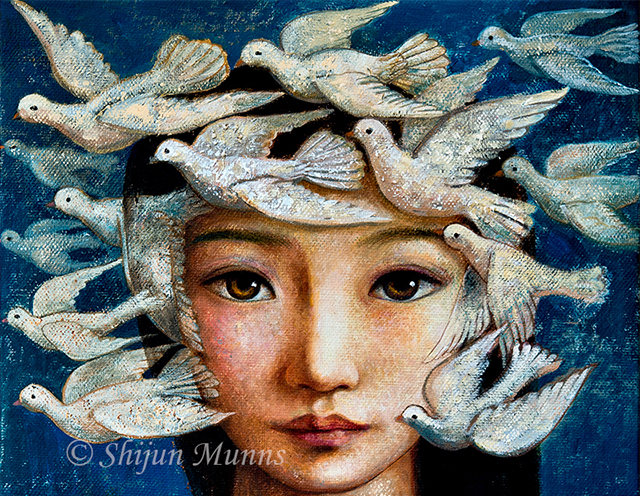 I am excited to have my artwork shared in the Living Magazine May 2017. I am so thankful and blessed to have such a wonderful friend, Saashya Ridrigo, originally from Sri Lanka but now working in Austin, TX, who made this all happen! I would like to share her amazing writing with you. 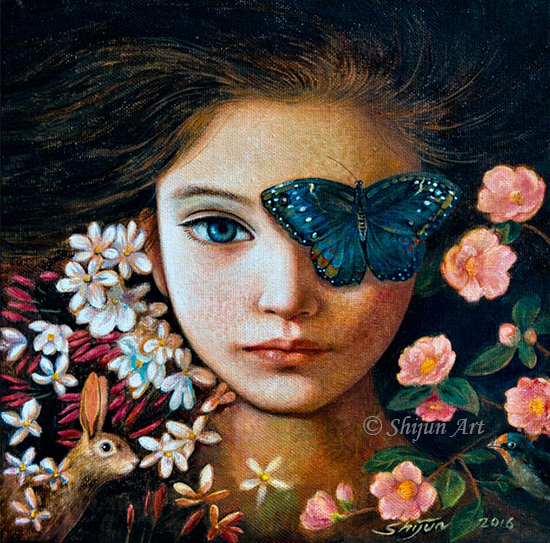 It was like I was back home in Sri Lanka as I stand in the kitchen lit with golden sunlight. The rays sing a warm tune that the flourishing potted plants seem to enjoy. Neatly arranged dessert plates of cookies and chocolates invitingly look up at me from the table. A most gracious hostess asks more than once if I would like some tea.

As the dogs bark outside, I'm treated to a tour of the paintings on the wall, after which the hostess and I return to the kitchen table for a chat. Across the table from me sits my hostess, a fellow Asian - Shijun Munns who is clearly no stranger to hospitality.

Growing up in China's Guangdong Province, Shijun discovered her love for drawing at the age of 10. She graduated from the Guangdong Academy of Arts in 1987 and has since established an international following - a segment of which resides in Atlanta, Georgia, where she now lives with her husband. 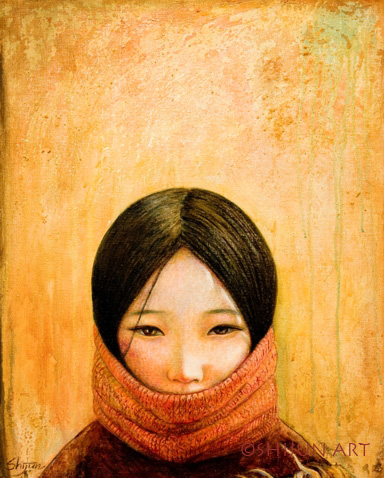 There is a ethereal calmness in her personality that seeps through Shijun's paintings. Her work commonly depicts women with soft features, porcelain skin and almond eyes: a face that draws inspiration from the faces of women in Tibet, a region that Shijun holds close to her heart.

'Image of Tibet' depicts a young Tibetan girl from the shoulders up. Her dark hair, neatly parted down the middle, is tucked into a thick scarf that's tightly wrapped around the bottom half of her face, revealing only her pale nose, rosy cheeks and the window to her soul - brown eyes.

With a watery background of pale yellows and ochres, the painting is minimalistic. Its simplicity provides little to look at; and yet, it is this simplicity that offers a continuous stream of questions about the girl in the painting and her story. 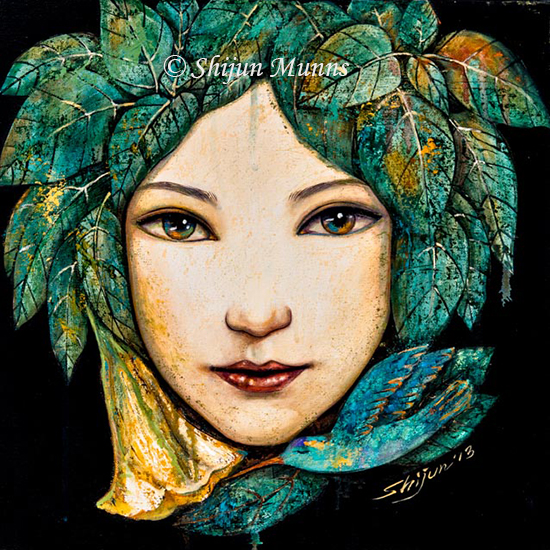 'Eye of the Forest' is one such painting. It depicts a pale face framed with green and turquoise leaves that closely resemble tarnished copper. The woman's face has a beauty that is almost other-worldly.

She reminds me of Eve in the Garden of Eden but her eyes, the sharpest element of the painting, depict a clarity and serenity that is reminiscent of Mother Nature. To me, the painting pairs well with the words of Kublai Khan, Samual Coleridge's highly interpretive poem that's rich with imagery, metaphors and biblical references. 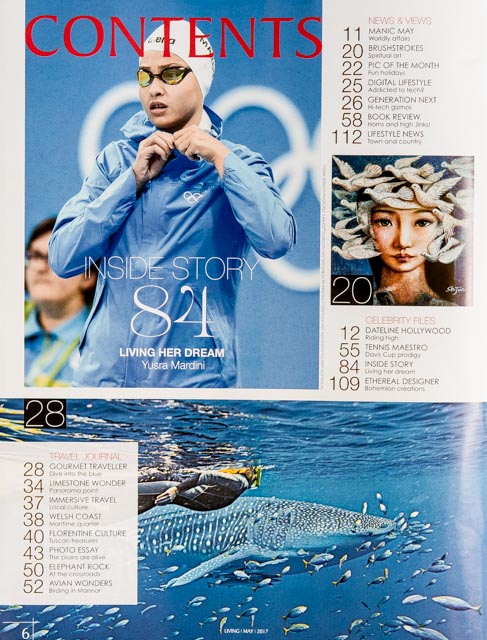 It isn't often that I'm invited into the home of artists whom I interview; a quality that is reflected even in Shijun's paintings. Her work is highly interpretive but not in a complex, haughty, fine-art sort of way.

Despite her highly trained eye and sophisticated understanding of art, Shijun has a way of using her brush to narrate a story to which we can all relate. They aren't stories that we fit into; but rather the opposite, in that our stories fit into them and make Shijun's paintings a personality that is one of a kind.

With paintings that combine the trio of realism, impressionism and abstraction, Shijun is an artist with traditional roots, a modern edge and a spiritual energy that's as refreshing as it is necessary in today's chaotic world. 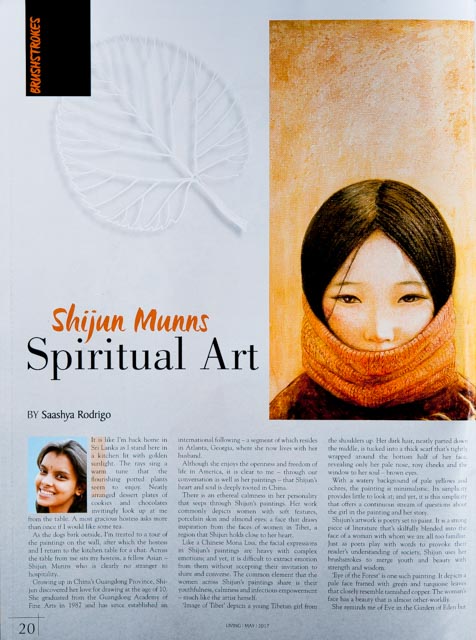 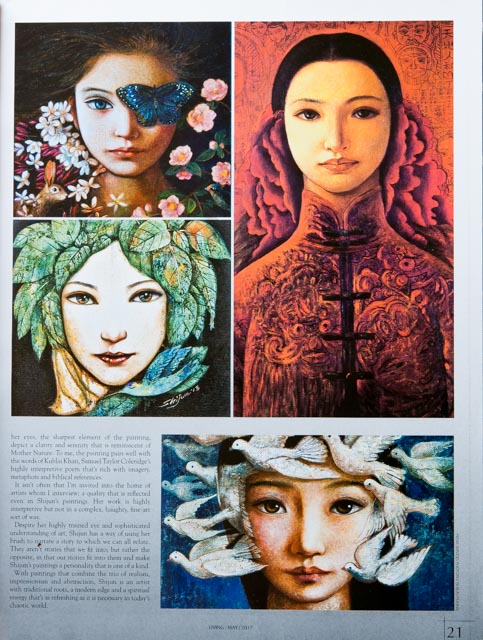 Some of my artwork published in Living magazine 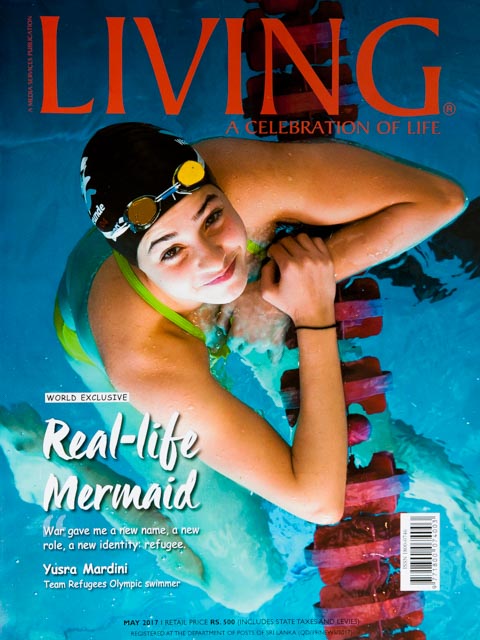 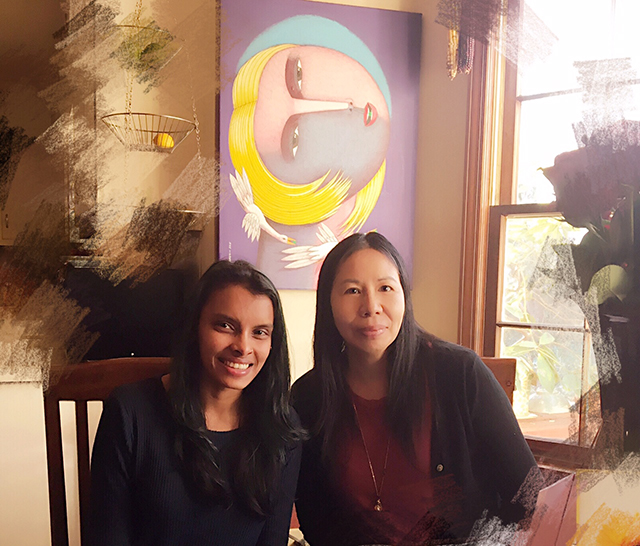 With Saashya at my home 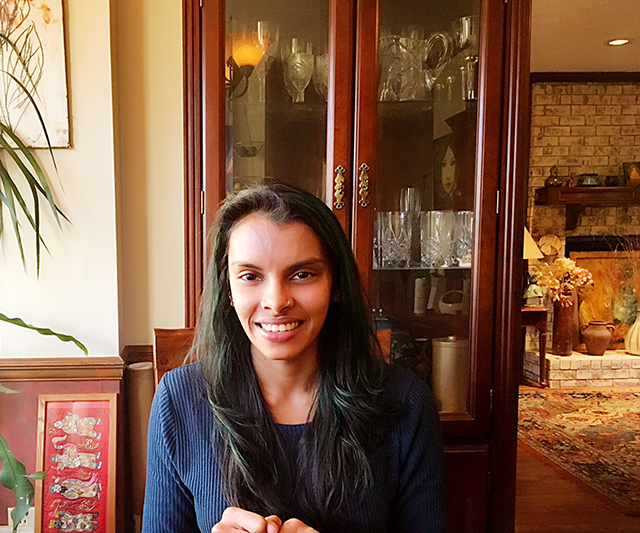 My talented new friend Saashya in my home